earFold™ is marketed as a `simple and effective treatment for the correction of prominent ears`. 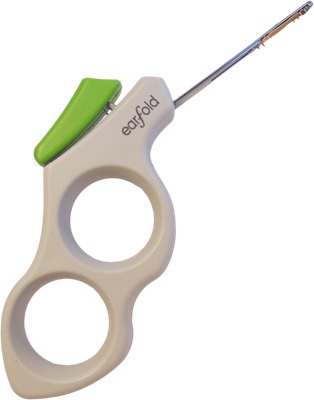 It is the brainchild of consultant plastic surgeon Norbert Kang, who is based at the Royal Free Hospital in London. His intention was to provide a minimally invasive solution for treating prominent ears and this led him to invent the earFold device. The company which makes it, Northwood Medical Innovation Ltd, was acquired by Allergan plc, the maker of Botox®, in 2015. They hope to further commercialise the device, and make it available to patients across the world.

The procedure takes around 20 minutes, is performed under local anaesthesia, and carries a lower risk and fewer side effects, including less pain and discomfort, than traditional otoplasty or ear correction surgeries.

Results are seen immediately after the procedure, and outcomes are said to be consistent and permanent.

Thanks to a Pre-Fold device, you can also see your expected results before undergoing the procedure.

The earFold is a thin (5mm width x 0.15mm depth) medical grade strip of a nickel and titanium alloy, known as nitinol, which is commonly used in other areas of medicine, such as stents used in heart surgeries. The nitinol strip is also plated with 24-carat gold to reduce its visibility and make it almost undetectable under the skin.

The earFold implants are permanent fixtures within the ear, and as such, they have been designed to be biocompatible, thus are not harmful or toxic to the body.

How Does It Work?

The procedure works by folding back the ear cartilage via the insertion of the earFold implant.

The implant is made from nitinol, which is also known as a Shape Memory Alloy (SMA). SMAs are made to remember their shape, this means that once positioned in place, using an introducer, and then released, it immediately adopts its pre-set shape and in doing so grips and folds the cartilage, giving the ear it`s new shape. This action creates an anti-helical fold and reduces prominence in the ear.

During a consultation, your practitioner will clip the `Pre-Fold` device onto the outside of your ear, so you can have a realistic idea of how your ears will look, before undergoing the procedure. The Pre-Fold tool, is made of the same alloy as the earFold, but can be moved around the ear, until the desired shape is achieved. Once, you are satisfied with the placement of the implant, the position is marked on the skin, ready for the actual earFold to be inserted. Depending on the correction needed, more than one earFold implant may be used in each ear. 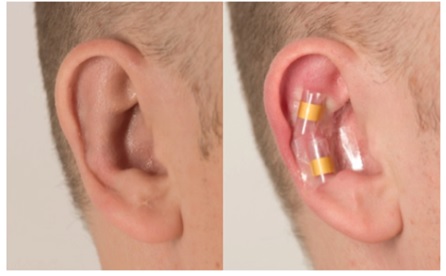 Testing Ear Shape with the Pre-Fold

Before the procedure takes place, the ear is cleaned thoroughly with an antiseptic solution, and placement of a surgical drape over the ear creates a sterile area to operate. A local anaesthetic is injected to numb the area, and once it has taken effect, a small 1cm incision is made in the skin. The skin is lifted away from the cartilage to create a space for the introducer so that the implant can be positioned and released. Once it is in place under the skin, it folds back the cartilage to reveal the desired shape. The incision is closed with dissolve-able stitches and covered with a small adhesive dressing. The procedure takes approximately 20 minutes.

Should Be Used By

The earFold procedure should only be performed by a qualified surgeon who has been through a full training programme for implanting the device, and who can provide certification in evidence.

What Is It Used To Treat?

The earFold is used to correct prominent, or sticking out, ears, to give the person their desired ear shape.

Your chosen practitioner can answer any questions that you may have about your eligibility for the procedure.

How Long Does It Last?

The correction of the prominent ears is permanent.

Following the earFold procedure, you will be able to immediately resume your daily activities. No bandages are required but the area must be kept clean and dry.

As a precaution, a 3-day course of antibiotics is often prescribed to prevent infection. Most clinics will organise a follow-up appointment with a nurse, to check on progress and healing.

The earFold procedure does not carry the same risks that are associated with traditional corrective ear surgery. There will only be a small scar on the front of the ear where the implant has been inserted, which means there is a much-reduced risk of keloid scarring in the area.

There will some discomfort at the incision sites, once the anaesthetic has worn off, which may last for a couple of days. Painkillers, such as paracetamol or ibuprofen, are advised as needed, if the pain is troublesome. There is also likely to be some swelling, bruising and minor bleeding, which should resolve itself within a few days to a week. The sutures used to close the incision will absorb and drop out naturally after about 2-3 weeks.

There may be some sensitivity in the treatment area for up to 12 weeks after earFold surgery, but it will be mild. Avoidance of sleeping on your ears can reduce sensitivity and discomfort, particularly important to do in the first few weeks afterwards.

Contact sports should be avoided for at least a month after the procedure. Wearing earrings in the treated ears should also be avoided for up to 2 weeks to reduce the likelihood of infections. Care should be taken when using mobile phones due to their close contact with your ears, especially during the healing period.

Not To Be Used In

Pregnant and breast feeding women, and those with underlying health conditions, should contact their GP before undergoing the earFold procedure.

The ear correction is suitable for adults and children above the age of seven.

earFold procedures are not available for free on the NHS.

The cost of treatment will vary between clinics, and will also be dependent on the level of correction needed and whether the treatment is for both ears, plus the number of devices required during the procedure. You can expect to pay approximately:

There is unpublished data from studying 403 patients that suggests that, unlike traditional ear correction surgery, there is a zero to nominal risk of a recurrence of the prominent ears. This is more common with traditional surgery, where published data suggest a risk in almost a quarter of cases, due to slipping, snapping or loosening of the stitches. Reported data suggests that this is not a concern with earFold; once it has been placed, it should be permanent.

Before and After Photographs 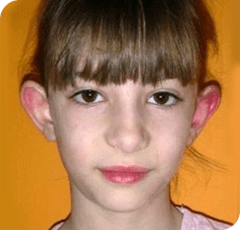 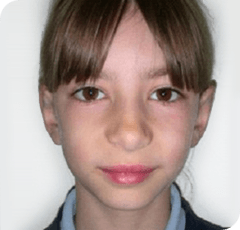 Young child before and after earFold procedure 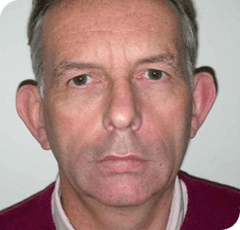 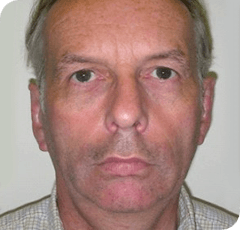 50-year-old male before and after insertion of earFold

Images Courtesy of earFold
(Before and After pictures are real patients, your results may differ.)

Click for ALL earFold™ clinics in the UK & Ireland registered and verified by Consulting Room.