Dermabrasion, Dermasanding or Dermaplaning is a surgical procedure in which the plastic/cosmetic surgeon or dermatologist scrapes away the outermost layer of the skin with a rough wire brush, a tool containing diamond particles, or a hand-held instrument which resembles an electric razor. It can be used to treat wrinkles and certain pigment marks caused by sun damage, however more and more people are choosing lasers instead of dermabrasion to resurface their skin. It can also be used to remove some tattoos, although lasers are more commonly used for this today as well. Most patients heal within 9 or 10 days and are generally presentable to the general public after this period. However, healing can be delayed in older patients, or if you have any post-operative infection. Redness of the skin can take 3 months or so to fade. Private prices for a Dermabrasion, Dermasanding or Dermaplaning can range from £1,000 upwards depending on the extent of the area treated.

Dermabrasion, Dermasanding or Dermaplaning is a surgical procedure that has been performed since the late 1950’s. It is another example of a treatment, which aims to “resurface” the skin. It is similar in its aim to lasers or chemical peels, but uses a machine to remove the outer layer of the skin or epidermis and then the top third part of the dermis of the skin.

In recent years, the use of this particular form of skin treatment has declined as chemical peels and lasers have become more popular. A milder form of dermabrasion, known as microdermabrasion, has become very popular recently.

According to the American Society for Aesthetic Plastic Surgery (ASAPS), 5,427 dermabrasion (not including microdermabrasion) procedures took place in 2017, a decrease of 27.9% on 2016 statistics. They did not gather data on this for 2018.

Dermabrasion is still a useful procedure, however, particularly for certain types of scars.

If you are considering dermabrasion, the following information will give you a basic understanding of the procedure. It can't answer all your questions, since a lot depends on the individual patient and the practitioner.

Please ask a practitioner about anything you don't understand.

How Does It Work

What is Dermabrasion and how does it work?

The practitioner scrapes away the outermost layer of the skin with a rough wire brush, or a tool containing diamond particles. This machine is like any sanding device in that sheets of paper roughened with either aluminium oxide or silica carbide crystals (known as dermasanding) are attached to a motorised handle. As the paper rotates, the skin is “sanded down”. The scraping continues until the surgeon reaches the safest level that will make a scar or wrinkle less visible (please see diagram below indicating the depth of resurfacing).

In dermaplaning, the surgeon uses a hand-held instrument called a dermatome, which resembles an electric razor. The dermatome has a blade that moves backwards and forwards to “skim” off the surface layers of skin that surround a deep scar or other skin defect. The skimming continues until the lowest point of the scar or wrinkle becomes more even with the surrounding skin, and the skin is much smoother.

The skin which has been skimmed by the machine, then heals, producing tighter skin and reducing the appearance of wrinkles and scars. 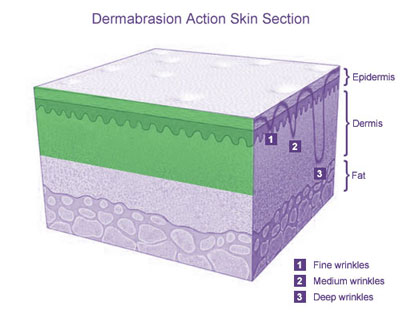 What skin conditions can Dermabrasion treat?

Dermabrasion can be used to treat wrinkles and certain pigment marks caused by sun damage. It is useful for reducing the appearance of raised or sunken scars due to acne, chicken pox, or certain surgical scars. It can also be used to remove some tattoos, although lasers are more commonly used for this today.

The technique can be used on either small areas of the skin (such as in treating lines around the lips) or over larger areas of the face.

Dermabrasion cannot be used to reduce pore size, or to improve sagging skin.

What happens during a Dermabrasion treatment?

Your first discussion with a surgeon should set out what you expect from the treatment and how you and your doctor see the procedure turning out.

A medical history should be taken, to ensure that there are no reasons why you shouldn’t have the treatment. You would also normally be asked to read detailed information about the treatment and sign a consent form, which means that you have understood the potential benefits and risks associated with a dermabrasion procedure.

Photographs may also be taken by the practitioner, as a “before and after” comparison at a later date.

You would normally be asked to stop taking any aspirin or aspirin like drugs a week or so before the treatment to reduce bleeding following the operation.

Beforehand, some practitioners like to use a test patch of skin, usually behind the ear, to show the patient how the technique works and check that you have no problems with scarring or pigment changes to the skin during the healing process.

The full treatment involves a local anaesthetic on the area to be treated, and it is usually combined with some form of sedation to make you feel drowsy and to lessen any pain or discomfort.

The area requiring treatment is dermabraded using one or a combination of different types of dermabrasion (as described above) until the required depth of skin removal is reached.

This is a skilled technique which requires an experienced operator to use the machine and to judge how badly the skin is damaged and how much skin needs to be removed. Consequently, the procedure may take up to an hour and can be difficult. Dermabrasion generally causes a lot of bleeding, making it difficult to judge when to stop the removal of skin.

After dermabrasion, the bleeding may be stopped with cold compresses before a final dressing is applied.

A repeat procedure may be required a couple of months after the first treatment to enhance the results. Dermabrasion can be repeated every few years, or combined with other treatments to help maintain the initial effect.

How long will it take to recover from Dermabrasion?

Most patients heal within 9 or 10 days and are generally presentable to the general public after this period. However, healing can be delayed in older patients, or if you have any post-operative infection. Redness of the skin can take 3 months or so to fade.

Side Effects and Risks

What are the risks and potential complications from Dermabrasion treatment?

After the procedure, side effects can include pain, along with swollen and red skin on the area of the face which was treated.

Once the skin begins to heal, itching can be a problem. Very rarely an infection can develop.

Many of the potential long term problems of dermabrasion can be avoided by careful guidance as to whether your skin is suited to the treatment and exactly what sort of dermabrasion you should undergo. Even then, risks such as scarring and pigment changes (both too much and too little pigment) can occur following treatment.

What should you do after a Dermabrasion procedure?

It is very important that you follow the advice of your practitioner carefully after dermabrasion. The aim is to keep the wound soft and free from infection during the healing process to help the treatment work as effectively as possible and to reduce the risk of complications.

After dermabrasion you may be advised to:

Who should not have Dermabrasion?

Dermabrasion is not recommended in people with olive or black skin because of an increased risk of hypo pigmentation (whitening) and hypertrophic (raised) scarring.

The results of dermabrasion in skin which is uneven in pigmentation or colour can also be unpredictable.

Treatment may also not be recommended if you:

Who Can Do It

Who can perform Dermabrasion?

Generally, only experienced plastic or cosmetic surgeons or dermatologists (skin specialists) should perform a Dermabrasion, Dermasanding or Dermaplaning procedure.

For more information about practitioner training, qualifications and relevant medical organisations please view the information contained within the Legislation section of the Consulting Room.

Is Dermabrasion available on the NHS?

It is highly unlikely that anyone considering dermabrasion would be able to access this free of charge on the National Health Service.

However certain regions do make special cases, and we would always recommend that you visit your General Practitioner before embarking upon a cosmetic procedure involving surgery. As well as their advice and guidance they may also be able to refer you to a local NHS Hospital who can treat you.

The NHS has set out the following guidelines on how to get cosmetic surgery through the NHS:

"To qualify for surgery on the NHS you must meet specific criteria as set out by your local health authority. The NHS will not pay for surgery for cosmetic reasons alone. Reconstructive and cosmetic surgery to correct, or improve, congenital abnormalities and injuries will usually be carried out free of charge.

To receive cosmetic surgery from the NHS, you will normally need a referral from your GP. You will have a consultation with a plastic surgeon and an assessment by a psychiatrist, or psychologist. It will then be decided whether there is enough social, psychological, or physical benefit to be gained to justify surgery."

What is the average cost of Dermabrasion?

Private prices for a Dermabrasion, Dermasanding or Dermaplaning operation can range from £1,000 to several thousands of pounds depending on the extent of the area treated.

Summary of advice for Dermabrasion

Dermabrasion can still be a very effective treatment in the hands of a skilled operator. Unfortunately, such experts are becoming rarer as more and more people are choosing lasers instead of dermabrasion to resurface their skin.

The advantage of ablative lasers or fractional laser resurfacing is that they are more precise in removing the skin, cause less bleeding (and so help the practitioner to be more accurate in how much skin is removed) and generally give a better result with fewer problems after the treatment.

Before and After Pictures

Before and after photographs of Dermabrasion

Results vary enormously depending upon both the patient and the skill of the individual surgeon, so outcomes for cosmetic surgery procedures will always be more variable than those for less invasive non-surgical treatments.

We currently do not have any before and after images for Dermabrasion, Dermasanding or Dermaplaning procedures.

Click for ALL Dermabrasion clinics in the UK & Ireland registered and verified by Consulting Room. 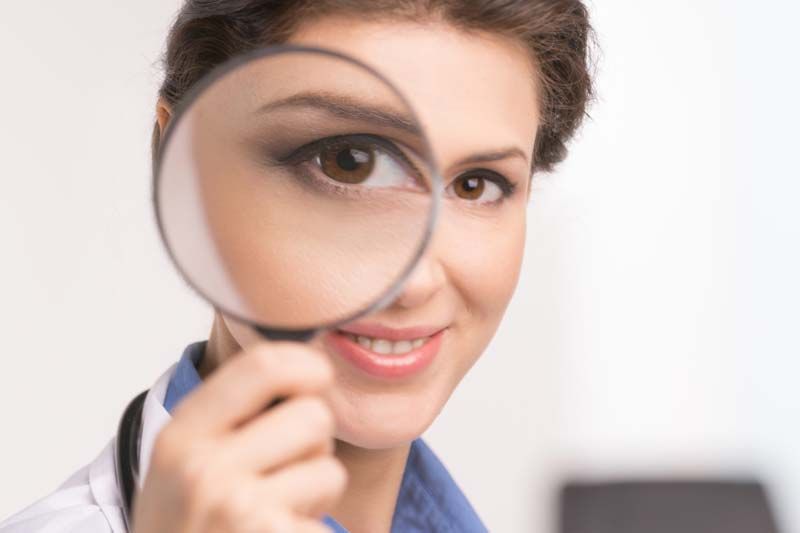 People thinking of having a cosmetic procedure are being urged to question their doctors before going ahead with treatment, in new advice issued on 1st June by the General Medical Council (GMC).