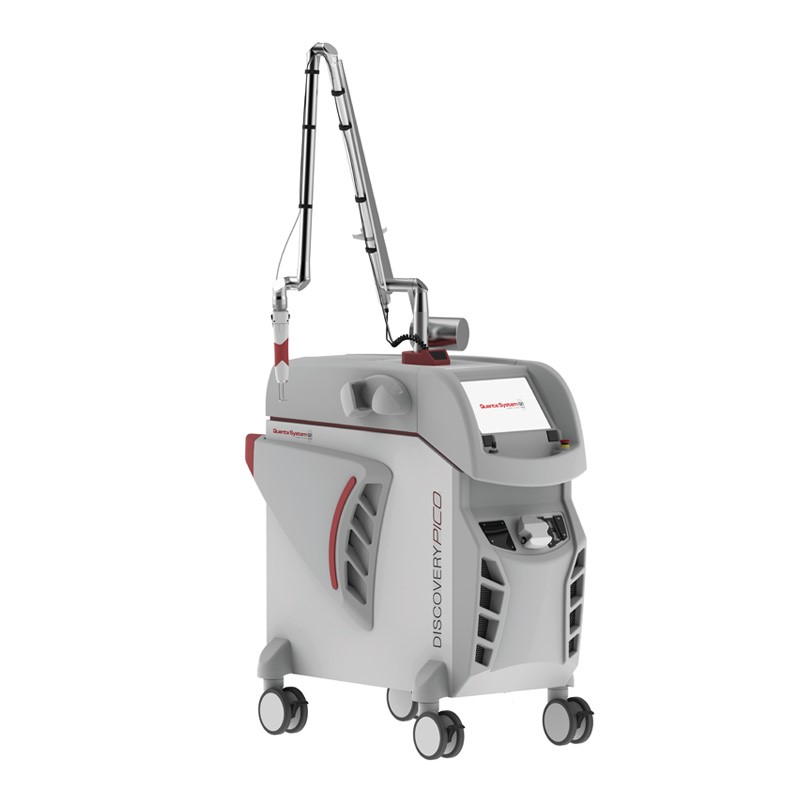 The Discovery Pico and Pico Plus (PICO SERIES) has been available in Europe since mid-2015.

It claims to be the next generation in picosecond laser platforms, following in the footsteps of the pioneering technology, but improving and bringing new ideas to the marketplace to treat benign, pigmented lesions and remove tattoos.

The PICO SERIES has been developed by the Italian company Quanta Systems.

It claims to transcend all conventional, stand-alone picosecond lasers by combining the new efficacy and speed that picosecond brings, with the proven safety and efficacy of long-standing nanosecond Q-switched technology, traditionally the gold standard for tattoo removal treatments.

The devices come with a variety of spot sizes and tip formations, including round tips and squared shaped tips for treating different sized and shaped tattoos and lesions. The spot shape and tips are based on their OPTIBEAM® II technology.

The square spot profile is said to allow safer and more effective treatments than traditional spot shapes, due to the even energy distribution over the treated area, which results in less skin trauma, and decreases the risk of side effects, hot spots, as well as unwanted overlapping of treatment. It does this as the OPTIBEAM II handpiece ensures a perfect FLAT TOP beam profile which allows it to distribute the power of the laser evenly across the output beam profile, as demonstrated in this illustration.

The PICO SERIES (within the Discovery Pico Plus model) also provides the world’s first device to include a nanosecond delivering 694nm Ruby laser alongside the picosecond and nanosecond technology of the Nd:YAG. This provides a multi-treatment solution, and allows the practitioner to have the option to treat, and remove, notoriously tricky inks from tattoos.

There is also an add-on of the FraxTip™ Lens, a fractionated round tip, which can be used for skin rejuvenation treatments that benefit from this technology. This lens concentrates the energy generated by the laser to produce targeted trauma through mechanical impact in the epidermis. This stimulates the healing response and new collagen production, without producing any thermal or heat damage.

Q-Switched lasers have traditionally been the gold standard method used for removing tattoos, and still are, but with the advent of picosecond technology, the treatment was made quicker, and in some cases, more efficient and less painful, depending on the tattoo type.

Q-Switched laser treatments use intensive laser energy to heat up and break the tattoo ink particles into smaller pieces which the body can then remove more easily. With picosecond lasers, like the PICO SERIES devices, you will get a much gentler and more effective treatment as picosecond laser tattoo removal doesn’t use any heat; it uses ultra-short laser pulses which bombard the ink particles at very high pressure – something called a photoacoustic affect. The ink breaks down into tiny dust particles – they literally shatter. The particles are then absorbed much more quickly and easily, and eventually get eliminated by the body as before.

By having two wavelengths emitted from the Discovery Pico devices (532nm and 1064nm), both of which can produce picosecond, as well as nanosecond pulses, and have a free-running mode as well, it is able to treat many different tattoo colours and depth of pigment, across differing skin types, by altering the choice of laser energy delivery during the treatment sessions. The same is true when targeting lesions which contain pigment, such as age spots or for skin rejuvenation applications. With the addition of a Ruby laser, the device can target even more stubborn pigments.

Each wavelength and pulse type is targeted as follows:

• 1064nm (nanosecond mode) - used for removing a wide range of specific benign, pigmented lesions and acne scarring, as well as tattoo removal of darker coloured inks such as black, blue and brown.

The PICO Series, Discovery Pico and Pico Plus, has been made available in the United States by the American branch of the company Quanta Aesthetic Lasers, where it is marketed under the names Prima Pico and Prima Pico Plus. U.S. FDA approval was granted for it in April 2016.

In general picosecond laser treatment is said to be less painful than nanosecond delivery methods of tattoo removal or pigmented lesion removal, but both are considered tolerable.

There will be discomfort, whether the picosecond or nanosecond modes are used during a treatment session. The level of discomfort you feel depends on the area where the tattoo/lesion is located and your personal pain threshold. Any discomfort should be over quickly.

Following treatment, the area will feel sore and tender to the touch for a short while. Scabbing, blistering or crusting with itching on the skin in the treated area are to be expected from a PICO SERIES treatment, but they are a positive sign that the treatment is working and your body is processing the debris from the shattered pigment. You should not pick or scratch the area as you risk causing scarring or infection. You should also not cover the area treated in any cosmetic products whilst it recovers. Your practitioner will recommend suitable aftercare and any topical creams that you should apply.

The type of tattoo (whether it’s a professional or amateur one), the size of the ink particles and the ink colours used, which require different types of laser wavelength use, all have a bearing on the number of treatments sessions you will need to clear the tattoo. An experienced practitioner will be able to evaluate your tattoo and its response to treatment to recommend a realistic number of treatments that you will need, combining both the picosecond and nanosecond modes that come with the Discovery PICO SERIES devices. This combination of pulse delivery means that an optimum number of sessions can be used, likely to be fewer than with traditional Q-switched nanosecond laser removal techniques alone, meaning that small tattoos can be treated and leave virtually no trace in approximately 4 – 6 sessions.

The cost of Discovery Pico tattoo removal depends on the number of treatment sessions needed and the size and type of the tattoo.

Before and after photographs 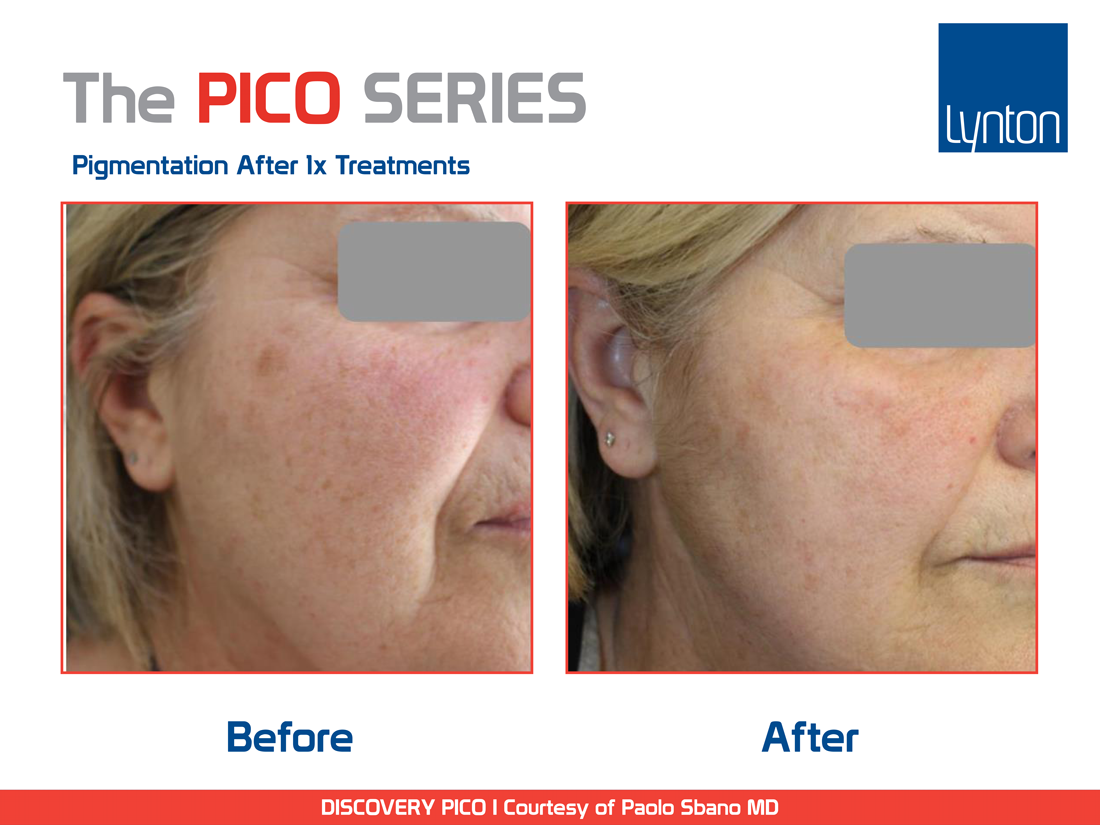 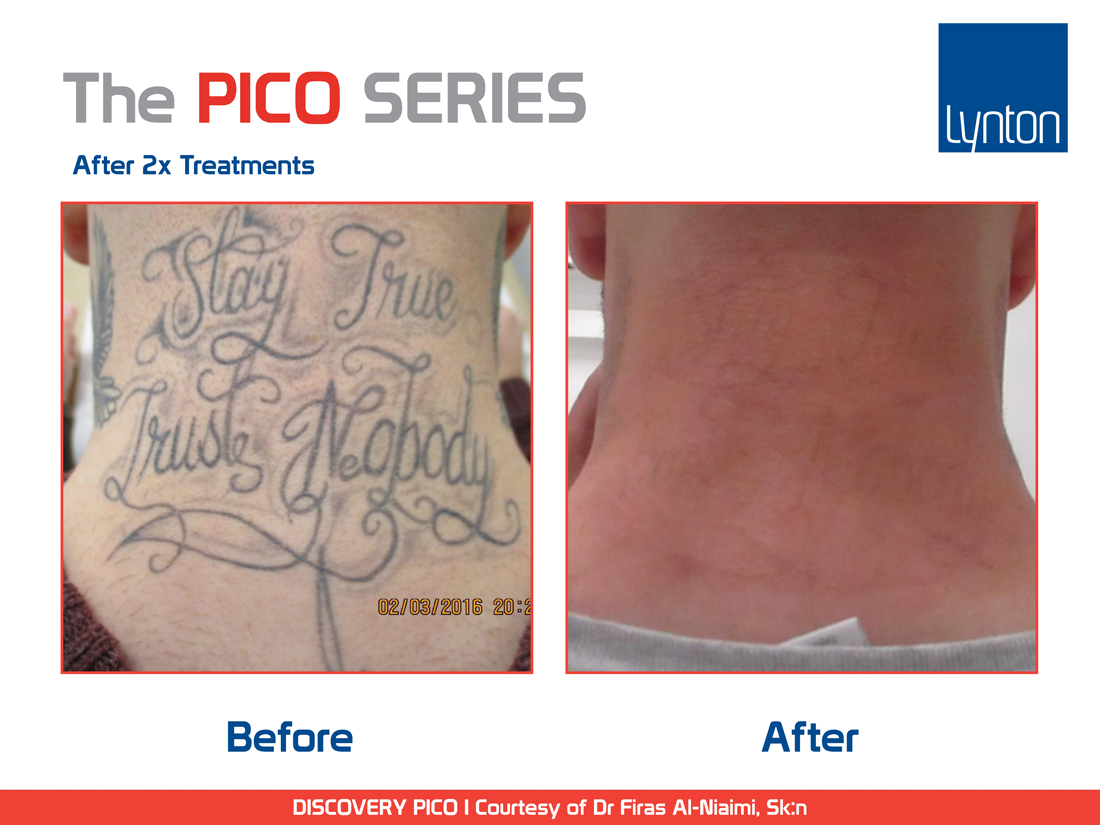 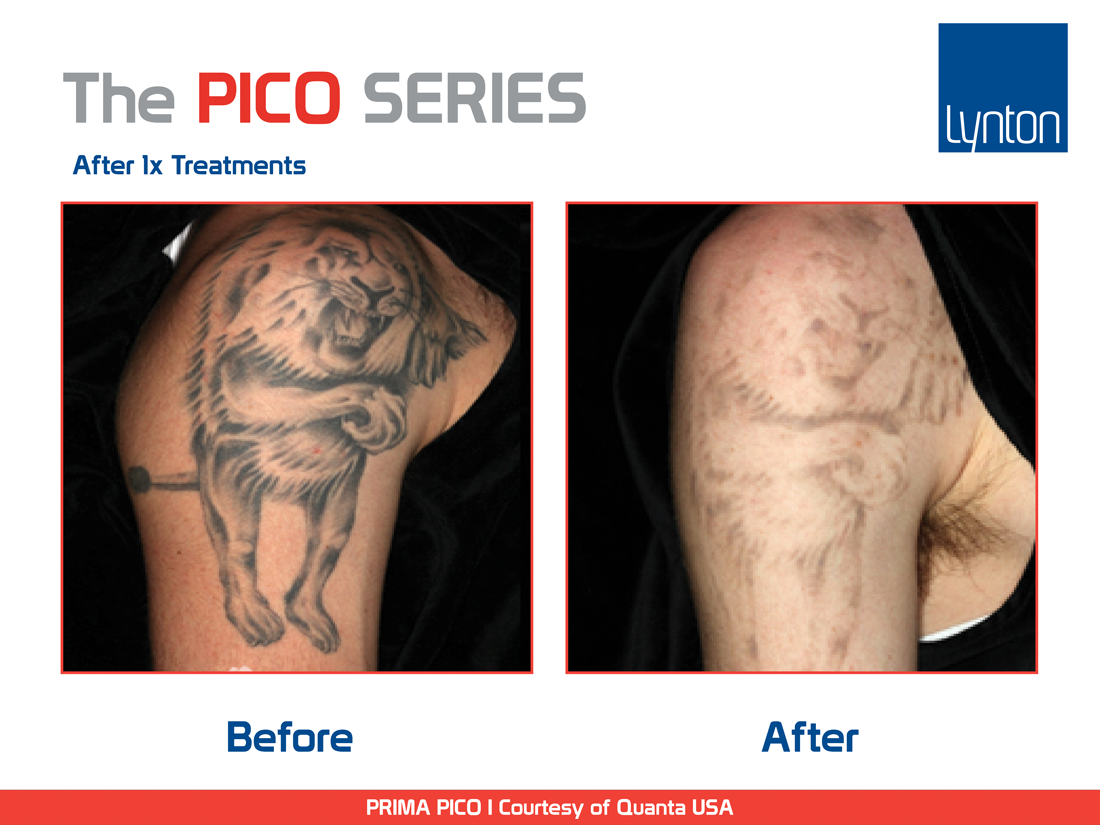