Cherry angiomas are fairly common skin growths that tend to be bright red in colour. Spider angiomas tend to appear as flat red spots with extensions protruding from the centre, giving them the appearance of a spider web. Angiomas are a benign build-up of blood vessels underneath the surface of the skin, and usually, angiomas are not removed unless they bleed often or are aesthetically unpleasant. However, if an individual wants to remove an angioma, there are a number of options available. 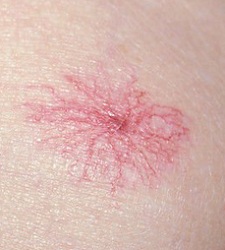 Laser therapy can treat an angioma by improving the discolouration and texture of the skin, with the aim of destroying the irregular skin cells so that new, healthy cells can grow in their place. Electrodessication can also treat an angioma by destroying irregular cells using a metal probe heated by an electric current. In both treatments, a small scar is possible, but recovery time is minimal. You can expect some redness and swelling, but this will resolve within a couple of days. In some cases, angiomas can also be treated with cryotherapy, whereby the angioma is frozen. This achieves the same result of destroying the irregular cells so that new, healthy cells may grow.

Cover-up or camouflage makeup can also be used to improve the appearance of a port-wine stain if laser treatment has been unsuccessful.

Cosmetic skin camouflage is the art of concealing a discolouration, blemish or scar with the application of specialist camouflage creams that are matched to the surrounding skin tones.

Advanced Cosmetic Procedures (ACP) is a new name for "Advanced Electrolysis". ACP uses either Short Wave Diathermy or Blend to treat unwanted skin blemishes, such as warts, skin tags, moles and other benign growths, as well as thread veins and vascular conditions with no mark left on the skin.