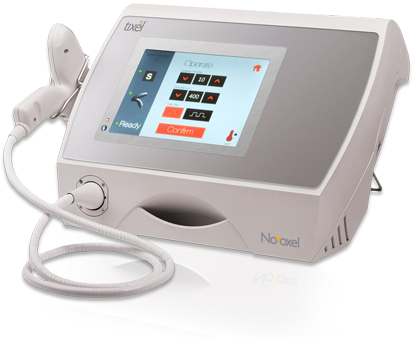 Tixel® is a novel device used for fractional skin rejuvenation which is based on Thermo-Mechanical Ablation (TMA) technology. It can be used for the same cosmetic treatments that devices such as ablative CO2 (carbon dioxide) lasers and non-ablative erbium lasers are commonly employed.

It has an ablative mode to create deep or shallow micro-channels of controlled damage to the skin to stimulate collagen production and aid rejuvenation, as well as a non-ablative mode which heats within the upper dermis of the skin, whilst protecting the outer layer, to create permeable, ‘open’ channels which can be used to assist in the transfer of topical serums and agents into the skin.

It was launched in the UK in early 2017 and is made by a German company called Novoxel GmbH. 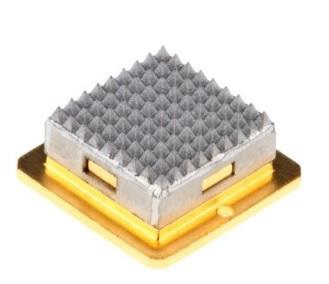 The thermal (heat) energy is emitted through a square tip attached to the device which carries a matrix of small,pyramid-shaped pins, available on a 1cm2, 9 x 9, or 81-pin tip and a smaller 6 x 4, 24-pin tip, for treating harder-to-reach areas, such as around the eyes. The tip is made up of a copper and gold heat reservoir covered by a thin titanium shell, which is heated by a small ceramic electric heater. These materials that are biocompatible with the human body and the titanium shell is sterile during treatment. The pins are heated up to a temperature of 400ºC, which is comparable to the heat generated by a CO2 laser. The pins can make micro-channels, or micro-pores, which are 170μm (microns) wide, 1250μm apart, and between 50 and 200μm deep, creating discrete and uniform treatment zones.

It can operate in three modes – ablative, non-ablative and open channel. 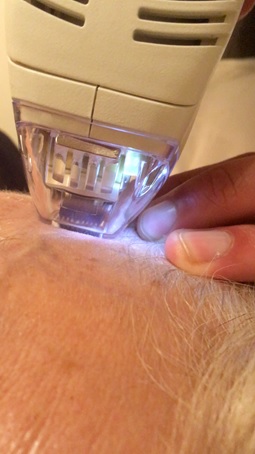 During treatment, the device tip is applied to the surface of the skin multiple times, via a piston-like action from the handpiece. The pins advance towards the skin by a simple continuous back and forth motion at a precisely controlled speed and distance. The pin apexes push the skin and the thermal energy which is stored within them is transferred through the apex of each pyramid in motion. This is done very quickly, during the brief contact with the skin which lasts only a few milliseconds (ms), and can be adjusted to between 5ms and 18ms. The tip distance ("protrusion") can be set to push the skin between 100μm and 1000μm, at intervals of 100μm. An 8ms pulse duration, for example, can achieve a thermal effect which is 100μm deep, while 14ms creates a 200μm deep effect. The pins are not sharp, they do not protrude the skin physically. The technique is therefore a non-invasive method of heat transfer to tissue by contact.

In all, the device has three settings which the practitioner can manipulate: the first (exposure time) determines how long they want the tip to touch the skin (in milliseconds); the second is the protrusion, i.e., how much of the tip comes out from the distance gauge (in microns); and finally, whether it is a single pass or double pass, i.e. touch once or touch twice.

Published trials have shown that after approximately three passes of a carbon dioxide laser, the surface of the skin will reach between 360ºC and 400ºC. The Tixel pins, which are heated to a constant 400ºC, do evaporate the water and tissue from the top layers of skin, instantly, in the same way that fractional CO2 (ablative) and erbium (non-ablative) laser beams do, but without the need for the presence of the chromophore within the skin, (light attracting agent or water), to cause the reaction, and without an ‘explosive’ ablation and tissue coagulation. The reaction, or creation of the tiny micro-channel damage is caused by skin contact with the pins alone.

The manufacturers claim this means that this makes the process less painful and safer, with reduced downtime and faster healing, as there is no risk from burns or charring of tissue, as associated with lasers.

People find treatment much more tolerable than with lasers, but application of a topical local anaesthetic is recommended to achieve as near as possible to a pain-free experience, particularly in more sensitive areas, such as when treating crow’s feet and eyelids.

Tixel should only be used by trained medical professionals, such as dermatologists, plastic or cosmetic surgeons, cosmetic doctors and advanced nurses, or trained advanced therapists under the supervision of a medical practitioner.

It can be used to improve fine lines and wrinkles, skin discoloration, sun damaged skin, skin tone and texture, as well as reducing age spots and acne scarring. In general, it can be used as a skin rejuvenation option where traditionally laser and IPL skin rejuvenation techniques have been used. It is suitable for use on the face and neck, as well as other areas of the body.

As well as stimulating new collagen formation, the resultant micro-pores or open-channels are proven to be more efficacious for transdermal delivery of topical serums and medicines than those produced through laser ablation. This can be used to assist in the delivery of potent skin creams such as hydroquinone to treat skin pigmentation conditions.

Treatment results are not permanent, in that your skin will continue to age in the normal way post-treatment. A good skincare regime and use of a broad-spectrum UVA/UVB protection from sun exposure should prolong the results from Tixel treatment. Your practitioner may recommend a maintenance treatment after a year or so, depending on the condition being treated.

The shallow depth of penetration of Tixel means that inducing scarring is considered to be relatively impossible.

Treatment is tolerable for most people, but if you are sensitive to pain then you may be offered a topical local anaesthetic or over-the-counter pain relief, especially for treatments around the eyes.

You should expect some redness, a feeling of heat and tingling for a few hours post-treatment which will subside. Swelling will also occur, especially with ablative treatment levels or treatments near the eye area. Redness and swelling may persist for a few days to a week, as experienced with fractional ablative laser-based treatments.

Minor crusting may appear after a few days which should be allowed to fall off naturally over the course of a week. You should not touch, pick, scrub or scratch the area as this could cause both infection and scarring from disturbance of the tiny scabs. You may wear make-up over the crusting approximately two days after treatment, but if you can avoid doing so you are recommended to as this will improve your healing

There should be no excessive crusting, flaking, bruising, blistering, nor bleeding with this treatment.

If you suffer from cold sores, then treatment around the mouth with Tixel may trigger an outbreak which would heal as normal.

The cost of treatment depends on the size of the area(s) being treated and the type of treatment, (ablative, non-ablative or open-channel). Prices can start from approximately £800 per ablative or non-ablative rejuvenation treatment session for a full face, or £300 per session for smaller areas such as the eye area. For open-channel or transdermal delivery treatments, expect to pay around £300 for a full-face treatment to prep the skin, with the cost of topical serums or medications used not included.

This is the proof of concept research report. The authors examined, what was then a prototype device for thermo-mechanical ablation technology. This early prototype study showed that a resonating thermo-mechanical array of high temperature (350 - 400°C) rods is capable of producing an array of craters identical to those produced with pulsed CO2 lasers.

This study evaluated the clinical results achieved with Tixel on twenty-six people. All received three facial treatments, spaced four to five weeks part, without analgesia or cooling. Results showed that skin complexion improvement was achieved in all people; average treatment pain of 3.1/10, downtime of 0-1 days, and redness clearance of 3.5 days. Patient satisfaction was 75% and wrinkle attenuation was achieved in 75% of the cases. There was no incidence of bleeding, scarring, or post-inflammatory hyperpigmentation. The authors were satisfied that this proved the safety of Tixel for ablative and non-ablative resurfacing.

This study aimed to evaluate the effect of Tixel on the skin permeability of three water-soluble molecules, including vitamin C. Tixel was applied on the skin for 8ms or 9ms at a protrusion of 400μm. The experiments were carried out partly on humans and partly on pig skin. The results showed that the micro-channels remained open for at least 6 hours, and skin permeability of the molecules was significantly enhanced by pre-treating with Tixel.

Click for ALL TIXEL® (Thermo-Mechanical Ablation) clinics in the UK & Ireland registered and verified by Consulting Room.