When approaching a clinic for Fraxel™ treatment, be sure to ask them which device they are using as this may have a bearing on your treatment options and results.

The Fraxel re:fine erbium fibre laser fires a 1410nm wavelength which is designed for superficial treatments at lower energy levels. It targets water in the tissue and not melanin (skin pigment) and can treat up to 650 µm deep into the dermis of the skin on all skin types (colours).

The Fraxel re:store erbium fibre laser fires a 1550nm wavelength, much like the original Fraxel SR and SR 1500 devices, which is deep penetrating, also targeting water in the tissue and not melanin. In addition the device is available as the Fraxel re:store Dual which as well as the 1550nm erbium fibre laser also includes the option for the practitioner to use a more superficial thulium fibre laser which fires a 1927nm wavelength, allowing for treatment of a variety of conditions, on all skin types and anywhere on the body.

The hand pieces for the Fraxel SR, SR 1500, re:fine and re:store are designed to glide comfortably across the skin and use patent pending technology called the Intelligent Optical Tracking System (IOTS), which ensures that the laser creates a consistent pattern of treatment by self-adjusting to the speed of the operator.

The Fraxel re:pair carbon dioxide laser fires a 10,600nm wavelength and is, according to the manufacturer, "the only CO2 laser on the market that delivers the efficacy of conventional bulk ablative lasers—without the prolonged downtime, risks or complications".

All the hand pieces come with disposable tips (single patient use).

The Fraxel SR, SR 1500, Fraxel re:fine and Fraxel re:store machines were awarded clearance by the American Food and Drugs Administration (FDA) for dermatological procedures requiring soft tissue coagulation; for the correction of peri-orbital wrinkles (crow’s feet) and pigmented lesions, including age spots, sun spots and skin discolouration; for skin resurfacing and for the treatment of melasma, (dark skin colouration which forms on sun exposed skin).

Fraxel re:pair is cleared by the FDA for ablation and resurfacing of soft tissue, rhytides, pigmented lesions, wrinkles, fine lines, furrows and textural irregularities. It is also the only fractional ablative device with FDA clearance for vascular dyschromia.

The machine fires a laser beam which is then split into thousands of microscopic beams, producing tiny dot, or pixel-like treatment zones on the skin; referred to as MicroThermal Zones (MTZs).

These MTZs penetrate deep into the skin, like an ablative laser, destroying the old cells. For every MTZ that the laser has targeted and therefore treated, it leaves the surrounding tissue unaffected and intact. This allows the skin to heal much faster than if the whole top layer of skin were removed as with an ablative laser. The body`s natural healing process means that the healthy tissue between the MTZs creates new, healthy tissue to fill in the damaged MTZs, hence slowly resurfacing the skin.

The laser treats between 12 - 20% of the skin with each treatment session.

What can it be used to treat?

Fraxel™ is used for the treatment known as skin rejuvenation, which includes; the reduction and possible removal of fine lines and wrinkles, improvement of deeper wrinkles, repair of sun damaged skin on the face, neck, shoulders and hands, the reduction of age spots and blemishes, acne scars and hyperpigmentation (areas of darker pigment or brown patches in the skin). Early trials also indicated that it is safe for use on most skin types, including Fitzpatrick skin types IV and V; Hispanic, Asian, Indian and lighter toned black skin.

Most patients describe an increased sensation of heat during the treatment. To minimise discomfort, topical anaesthesia is applied before the procedure and cooling is built directly into the new hand piece for improved patient comfort. The treatment takes 20 to 25 minutes for a full face with additional time for anaesthetic application.  After the treatment, most people feel like they have a sunburn, which usually diminishes in 1 to 3 hours.

It depends on your particular condition and how you care for your skin. Once your skin is treated, continue to protect the surface as directed. For conditions such as melasma, it is very important to avoid direct sun exposure. Your practitioner will give you specific advice based on your individual needs.

Fraxel™ offers speedy healing and minimal to no downtime.

For several hours after treatment the skin will feel tight and have the appearance of a “sunburned” look. The skin will continue to look “pinkish” for a few days and any swelling, which should be minimal, usually disappears after 1 – 2 days.

A bronzed, sun tan look caused by the dead, burnt cells at each MTZ will them remain for 3 – 14 days before naturally exfoliating.

As the skin heals itself, you will find mild to moderate skin flaking, possibly accompanied by itching, which may last for up to 2 weeks.

There is a very limited risk of infection or scarring, with no oozing or crusting of the skin having occurred according to the manufacturer.

Unlike as noted with other laser and IPL treatments, there appears to be no risk of hyper- or hypo- pigmentation (areas of darker or lighter skin colour) with Fraxel. This is thought to be due to the fact that areas of healthy tissue are kept intact between the treated areas, unlike with ablative lasers, meaning that lasting pigment change does not occur.

If the practitioner uses the laser at higher powers, there is a risk of mild blistering (mainly on the chin and temple areas) and/or temporary skin discoloration, especially in darker-skinned patients.

The intensity and duration of side effects depend on the aggressiveness of treatment and on your particular healing characteristics. Your practitioner will provide specific instructions about what to expect and how to minimize any side effects.

Although multiple treatment sessions were recommended with the original Fraxel™ SR device to obtain optimal results, with studies suggesting 3 - 5 treatments spaced about 5 to 7 days apart, the newer devices aim to achieve the desired results in a single session.

The number of treatment sessions required depends upon the individual patient and the condition undergoing treatment; your practitioner will be able to create an appropriate treatment regime for you.

Costs for Fraxel™ treatment depend on the area(s) being treated, the practitioner and the specific device being used and can range from approximately £450 - £600 per session for one small area of the face (e.g. forehead, cheek) or neck to £950 per session for a full face or décolletage (the area between the neck and breasts) treatment to up to £1,500+ per session for full face, neck and chest areas. Additional sessions may be required in some cases to achieve the desired results.

Before and After Photographs 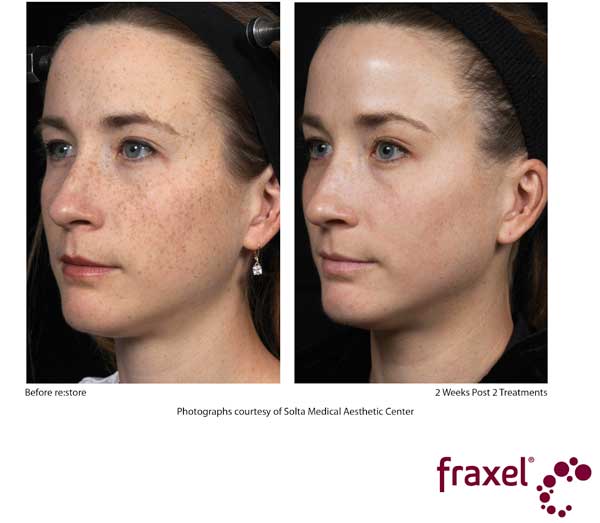 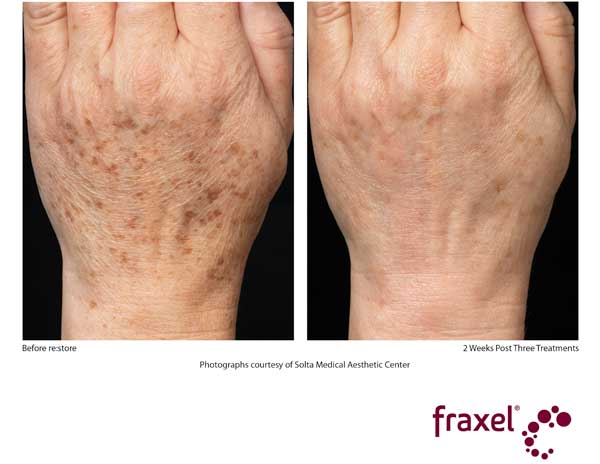 Fraxel™ is trademark of Solta Medical.

Click for ALL Fraxel™ clinics in the UK & Ireland registered and verified by Consulting Room.