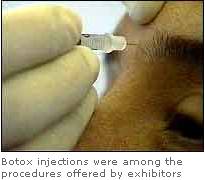 Although concerns persist among the medical profession about the wisdom of surgery for purely cosmetic reasons, research shows growing numbers of Britons would be willing to go under the knife.

Despite the entrance fee - a minimum of £25 - the two-day show was booming, with hundreds of people - well, mostly women - travelling to find out more about cosmetic procedures.

The floors thronged with interested punters, many of them seriously considering parting with hundreds or thousands of pounds to achieve their dream look.

Most were probably in their 30s or 40s but there were plenty of over-50s including some well into their 70s. Most came with female friends or relatives but there were a significant number with husbands or partners in tow.

More surprising was the number of girls barely out of their teens queuing to ask about breast implants and skin procedures. The business is booming exponentially in the UK. We are following in the footsteps of America.

And while some were clearly wealthy, the majority were normal middle-class women - the kind of people who 10 years ago would probably have considered bank robbery before they thought of having plastic surgery.

Body Beautiful spokesman Adam Taylor said: "The business is booming exponentially in the UK. We are following in the footsteps of America.

"A long time ago, cosmetic surgery was wholly the preserve of Hollywood people and very rich people but now prices are coming down.

"Techniques and procedures are becoming more refined, so now, whatever you are looking for, whether it's something temporary or something more permanent, it's there."

One of the main problems facing the prospective customer is finding out who to trust and where to go in a marketplace filled with impressive-sounding claims but few guarantees.

Customers are advised to have at least three consultations before choosing a surgeon, at a cost of as much as £150 each.

At Body Beautiful, consultations with a range of surgeons and consultants were available under one roof for the cost of the entrance fee. 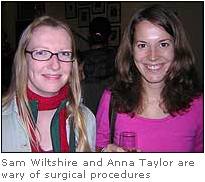 Mr Taylor said: "There's tons of information in the market and it can be confusing.

"If you go to a mass-branded clinic, you are likely to be faced with a sales pitch.

"And the problem with glossy magazine adverts is it's easy for someone to build a brand at very little cost and they don't necessarily have to be legitimate to do it.

"Some people go to their GPs for a referral but a lot of GPs are very anti-cosmetic treatments so they are going to try to dissuade you, rather than help you find the right surgeon - which is no good if you are already determined to have it done."

"Here they get to meet the best in the business, from both here and abroad."

The show was marketed as an enjoyable day out, with complementary champagne, free massages and a pampering section.

A baffling array of stalls offered consultations on everything from laser eye surgery and cosmetic dentistry to non-surgical fat-removal, Botox injections and the latest "cosmeceutical" creams and potions. 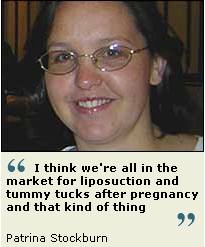 And there were lectures by industry experts on subjects from liposuction to cosmetic medicine.

Exhibitors ranged from exclusive Harley Street doctors to household names such as Bupa and companies promoting cosmetic surgery in France and South Africa.

Patrina Stockburn, 33, of north Kent, was visiting the exhibition with friends nine weeks after having a baby.

She said: "I think we're all in the market for liposuction and tummy tucks after pregnancy and that kind of thing.

"We're having a look to see what's on offer and what's available for the ordinary person."

But not everyone felt comfortable with the surgical aspects of the event.

Sam Wiltshire, 31, of London, said: "I came along out of curiosity really. I thought it was going to be different. I thought there would be more alternatives but so far it seems to be very heavy on the surgery and things like injections.

"It's probably really good for some people who have got huge birthmarks or real problems but it doesn't really appeal to me." 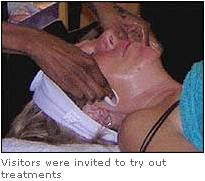 Her friend, Anna Taylor, also 31 and from London, said: "I guess there must be a massive market for these things. I think it would be quite easy to come here feeling alright about yourself and end up feeling quite rubbish."

One woman, in her 50s, who did not want to be named, sounded a note of caution for those considering going under the knife after a breast operation went wrong.

She said: "I'm scarred and I'm having to have it redone. It was the worst mistake of my life and I'm suing my surgeon."

She was visiting the exhibition on a fact-finding mission to help her in her case - but also to consult other firms and the British Association of Aesthetic Plastic Surgeons (BAAPS) about having the work redone.

She said: "I want to ask them what they do when surgeons think they're God. My surgeon just did not explain things to me properly and did not set out all the choices available to me. As far as I'm concerned he broke all the rules.

"I think I am the exception because I am not happy with my work. But I'm going to make sure I have at least three consultations before my next one.

Most of the exhibitors seemed to be having a field day, able to display their wares and talk to hundreds of potential customers they might not normally encounter.

Surgery firm Inamed Aesthetics had six surgeons carrying out free consultations on topics ranging from breast implants and wrinkle treatments to a new procedure to help weight loss by inserting a saline-filled balloon inside the patient's stomach.

Area manager Barbara Deakin said: "It's been fantastic. We've had a lot of interest and, surprisingly, from a very young audience, mostly interested in skin care and breast implants.

"People are genuinely interested and want to know about implants and the safety of implants, which is very important for the customer.

"This event is good for the industry because it exposes potential cowboys and it's a chance for the establishment of quality professionals to come to a marketplace and be seen and understand the way the market is moving."

Gloria Sattin, who was at the show representing Harley Street-based semi-permanent make-up specialist Debra Robson Lawrence, said her stall too was going down well.

She said: "She's done a demonstration and we're doing treatments on the stand.

"It's very interesting because a few years ago, people were embarrassed to have a makeover at Selfridges yet now people are happy to go on the coach and have it done in front of loads of people."

At £495 for a semi-permanent eyebrow treatment, the procedures are not cheap, yet Ms Sattin says many are not put off by the price - one customer asked to have some £2,000 of work done on the spot.