The Stigma of Plastic Surgery

Many in they UK still regard cosmetic surgery as a largely American indulgence. But with more operations than ever taking place, what's the chance of the person next to you having had some "work" done? 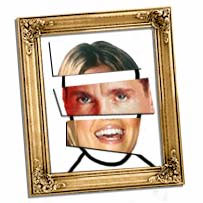 Joely Richardson is facing quite a dilemma - her marriage is on the rocks, so would breast enhancement make her happy? The beautiful blonde ponders this poser on billboards, all to advertise her new TV series about plastic surgeons.

With its unflinching depiction of invasive procedures such as liposuction and butt implants, Nip/Tuck, which begins in the UK on Tuesday, has been described by one critic as "Six Feet Under six hours earlier". The show's catchphrase, "tell me what you don't like about yourself", has special resonance on both sides of the Atlantic.


For cosmetic enhancement is a thriving industry in the UK, and it is not just glamour models, aging starlets and Dale Winton who keep plastic surgeons in Ferraris and speedboats.

The number of Britons trying to improve on nature has increased six-fold in the past six years, with an estimated 25,000 surgical procedures performed in 2002. Add non-surgical procedures such as Botox injections and laser treatment, and that figure climbs to 75,000 a year, according to Bupa.

Compared to the United States, where patients attend "Flaunt It" parties to show off their new breasts, bums, pecs and noses, it seems Britons prefer to be discreet about the "work" they have had done.

Dr Patrick Bowler, the chairman of the British Association of Cosmetic Doctors, says few of his patients - who include 20-somethings and men - admit to the treatments they've had.

"British women want to look better, they want to be told they look better, but they don't want to say they've had a face peel. Few of my patients would tell their husbands - they might tell their closest friend, but most keep it secret. I doubt we'll become like America, where 'who did your facelift?' is taken as a compliment."

Rumours constantly circulate about which home-grown stars may have felt the touch of knife or needle, yet often it's those who have had treatments too obvious to ignore who will talk openly about it.

Adam Searle, a consultant plastic surgeon and the honorary secretary of the British Association of Aesthetic Plastic Surgeons, says Britons' attitude towards cosmetic surgery is shifting - and not in a good way.

"It's become far more acceptable to do this, and if thoughtfully done, it can alter the lives of those who need it. But I fear that we may be slipping into a gratuitous cosmetic surgery trap, where people tumble into having multiple procedures as if it's a hairdo. Yet it carries very real risks, which have to be taken into account." 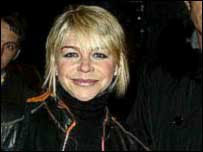 Nor are the risks properly explained to patients, says the consumer watchdog Which?

In an undercover investigation into cosmetic treatments such as Botox and chemical peels, only five of 16 consultations were considered good. Others failed to take a medical history and didn't fully explain the risks. The researchers also found a doctor under investigation for serious professional misconduct.

If this is, however, another trend which will spread inexorably across the Atlantic, what might be in store for Britons?

One part of the body where cosmetic surgery is still in its infancy is the feet, but not for long perhaps. Dr Suzanne Levine has made a name for herself among the style conscious women of Manhattan, who turn to her when they can't fit into designer high heels.

"It's up to patients to be able to enjoy their lifestyle," says Dr Levine, who performs a range of operations such as toe-shortening at her Institute Beauté clinic.

It has echoes of the ancient Chinese practice of foot binding, yet her patients are anything but enslaved. Many are "baby-boomer" career women in their 50s, whose feet have weathered a lifetime of discomfort in what the doctor calls "limousine shoes" - precipitously high with virtually no structure. 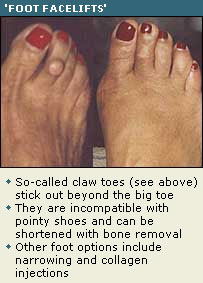 Dr Levine resets the bones in the foot, and, with lasers, returns a healthy glow to the skin.

Dr Magdi Greiss, a leading foot surgeon in the UK, frowns on such procedures.

"Last week a 16-year-old girl asked me to remove the inherited bunions on her foot because her boyfriend didn't like them," says Dr Greiss. "Do they hurt, I asked. No, she replied. So I told her to get a new boyfriend."

Yet he concedes that cosmetic foot surgery is creeping to these shores - already some clinics give collagen injections in the feet for high-heel wearers.

"Removing a bunion is a serious piece of surgery that involves slicing through the bone. There's a lot of pain. So I say, if it's not painful to start with, don't create more pain."

No longer is plastic surgery limited to facelifts and tummy tucks. Today's procedures can remodel those with cash to burn from head to toe: