As usual, at this time of year I found myself on the pilgrimage to the Royal College of Physicians, for the annual FACE conference. Undoubtedly the biggest conference of its kind in the UK; this year attracted a plethora of high profile speakers.

Notable were Professors Jean and Alastair Carruthers, the 'mother and father' of cosmetic Botox treatment, having first described this in 1987. Tim Flynn is always an entertaining and informative speaker, and his presentation on 'The Cosmetic Consult' was no exception. Koenraad de Boulle from Aalst in Belgium, with whom I have had the privilege of working on several occasions, gave a superb demonstration of facial revolumising, with his unique painless 'flicking' technique on needle entry.

There are always new things to see in the exhibition - I was particularly intrigued by the evidence-based presentation on treatment of hair loss with carboxytherapy using the 'RioBlush' machine. I will certainly be volunteering for a trial! Also interesting was the presentation by Basil Hantash on the management of dyspigmentation, which led to a rather heated debate with Zein Obagi when the safety of one of his recommended treatments was questioned...!

SkinBrands launched a new pigment control product, which is part of their extended and updated Skinceuticals range, called Pigment Regulator....... Looks promising, according to some clinical trials.

Merz Aesthetics had earlier last week announced the suspension of marketing of Novabel due to a very low incidence of granuloma emerging in 2 patients out of the 12,000 or more treatments since the product was launched. The situation was very professionally handled - the planned workshop on the product was changed to a very open and honest 'Q&A' session. In the nick of time, Merz's new botulinum toxin, Bocouture, gained a cosmetic licence in the UK the day before FACE, so giving the company something very exciting to talk about.

And Galderma and Allergan faced each other in the exhibition area - pistols at dawn! A great debate between the scientific officers of Ipsen, Allergan and Merz was a highlight of the conference - honours were probably even but there was much time for reflection on some interesting data from all three companies.

I've spent this week in the gym trying to work off the cheeseboard supplied at the Royal College - irresistible, especially the 'Stinking Bishop'. Did you know it's named after a farmer called 'Bishop' who was a real stinker, who in turn gave his name to a pear, which is used to make the perry that the cheese is washed in to give it its colour and flavour?

Socially, last year's Gala Dinner at Madame Tussaud's was surely beaten by this year's event at the Natural History Museum - I've heard of 'Walking with Dinosaurs', but dancing with them? A fabulous band and great hospitality made this an evening to remember - shame I was speaking the next morning....

Well, I've spent the week sorting through the brochures collected and notes taken, and can only look forward to next year and what that may bring. A vote of thanks to the organisers, and good luck to all for a prosperous run up to Christmas and beyond. Ha! Am I the first to mention the C-word this year?!!' 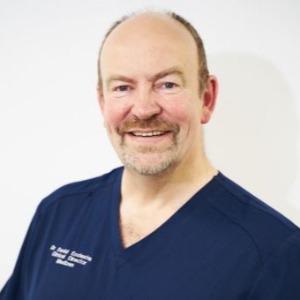 I’m Dr. David Eccleston and I am the Clinical Director of MediZen. I founded MediZen in 1999 alongside my wife Annie. I was one of the first doctors in the country to offer injectables and my experience has led me to be recognised as 'Aesthetic Doctor of the Year' and ‘Tatler's 'Man in the Midlands' for aesthetic injectables.

Dr. Eccleston has over 20 years of experience using Anti-Wrinkle Injections and other injectables, including dermal fillers. He developed an interest in Cosmetic Dermatology during 1993 while working as an NHS GP and then founded MediZen in 1999 alongside his wife, Annie. Every aesthetic practitioner at MediZen has been personally trained and approved by Dr. Eccleston, so you can be sure whoever you see at MediZen, you will receive the highest quality treatment.

Dr. Eccleston is one of the few medical practitioners in the UK to be a lead investigator in clinical trials on the use of all 3 of the UK licensed brands of Anti-Wrinkle Injections. He works closely with leading companies including Allergan, Galderma and Merz Pharmaceuticals.