The rise of celebrity and social media culture has formed a dangerous trend of beauty and health hacks. Rumours about natural remedies with the potential to cure women’s health problems, such as vaginal dryness, have been circulating in recent years. But is there actually any truth to them?

Reduced oestrogen hormone levels are the primary cause of vaginal dryness–also known as atrophic vaginitis – and is often triggered by menopause, childbirth, depression and more. A decrease in vaginal lubrication can lead to burning and itching, which can be extremely irritating and uncomfortable.

Although this is very common, the stigma surrounding this topic means many women suffer in silence. Previous research found that half of women aged 45-65 who had recently experienced ‘the change’ hadn’t consulted a healthcare professional about their menopausal symptoms.

It’s very important not to leave persistent vaginal dryness untreated. As well as causing you stress and aggravation, it can have a big impact on your sex life. The dryness can make intercourse uncomfortable and even painful. In turn, this can make it difficult to orgasm and lead to a complete loss of libido.

There are several doctor-recommended therapies to ease vaginal dryness, but people are still looking to natural fixes with endorsements from their favourite celebrities.

I can see how it’s tempting to try a natural remedy in the comfort of your own home, instead of being examined by a doctor, which many can find embarrassing. But the vagina is incredibly sensitive and experimenting with treatments that aren’t actually proven to work could worsen the symptoms and possibly lead to infections.

A change in diet

Online discussions have suggested a change of diet can ease or solve vaginal dryness. Can tailoring your diet by including certain ingredients really have that much of an effect?

It’s no secret that drinking the recommended eight glasses of water a day is good for your body, including the vagina. Failing to drink enough water could make the vagina drier, but if your dryness is caused by something else, increasing your daily H2O intake isn’t likely to cure it.

Black cohosh is a herbal supplement some believe can ease vaginal dryness. However, there is no scientific evidence to support this.

Soy contains plant-derived phytoestrogen, a compound that mimics oestrogen but is weaker. Because of this, it’s believed that eating soy products such as edamame and tofu can help vaginal dryness.

A previous study conducted in Israel discovered that 82% of the women (aged between 43 and 65) that took part experienced a significant reduction of vaginal dryness after consuming a soy-rich diet, although the actual amount of soy was not reported.

However, a more recent study showed that soy isoflavones didn’t make any noticeable changes to symptoms of vaginal dryness.

Thanks to the advice of Khloe Kardashian, a trend of applying vitamin E oil to the vagina emerged in 2016. The reality star posted online that this treatment can combat dryness and ease irritation.

A study found that vitamin E suppositories improved the symptoms of vaginal atrophy, including vaginal dryness, but the results didn’t differ much from the effects of using oestrogen cream.

However, many medical professionals were quick to warn that if you don’t suffer from atrophic vaginitis, applying vitamin E oil to healthy skin could cause irritation. And if you have ongoing vaginal dryness pre-menopause, you should see a doctor.

Vitamin E oil can potentially work as a natural lubricator and moisturiser for post-menopausal women. But there are many different forms and strengths of it, which can influence the results. It’s important to discuss this with your GP to determine whether it’s suitable.

Vitamin E oil can also breakdown latex condoms, so the two shouldn’t be used together.

It’s crucial to do a patch test on your skin before using it. Otherwise, you might discover that you’re allergic to vitamin E oil after applying it to your genitals.

Ever since Gwyneth Paltrow’s lifestyle publication Goop announced that lube is ‘toxic’, many have been on the hunt for natural alternatives.

Although doctors dismissed the actress’s theory as ‘far-fetched’, both medical professionals and the starlet have recommended oil-based lubricants, such as organic vegetable oil, olive oil and coconut oil to increase vaginal moisture during intercourse.

But there isn’t much evidence to show how safe applying coconut oil to the vagina is, even though it’s commonly used for improving skin moisture. Oil-based lubricants can also damage latex condoms, so avoid pairing these products during intercourse to prevent unplanned pregnancies or STI contractions.

Putting anything that isn’t doctor-recommended in or around your vagina can hinder vaginal self-cleaning and heighten the risk of infection.

A water-based lubricant is often advised for mild vaginal dryness, to ease the symptoms during intercourse. But like any lubricant, this isn’t a long-term solution for ongoing dryness. There are other treatment options available you should discuss with your GP.

Wild yams came into the spotlight in 2010 after featuring in the film Sex and the City 2. It’s been suggested this natural remedy can boost or stabilise oestrogen levels and help alleviate menopausal symptoms, such as vaginal dryness.

However, there is little evidence to prove this works. Research from 2001 found that although short-term treatment of wild yam extract showed no side-effects, it had little influence on menopausal symptoms.

Wild yams come in a variety of forms, such as tablets, cream, tea and capsules. But the correct dosage amount hasn’t yet been established.

What are the science-backed treatments?

Although some of the natural remedies can slightly ease dryness, there are many commonly used and doctor-recommended treatments with proven effectiveness.

For patients going through the menopause, a GP may recommend vaginal oestrogen which is available in pills (pessaries), vaginal creams and vaginal rings. This increases oestrogen levels.

It can take a few weeks before the medication takes effect, so you might benefit from using water-based lubricants at the beginning.

This is often a permanent treatment that should be continuous to prevent the dryness from returning. There are minimal side effects, but it can cause irritation and damage to latex condoms and diaphragms.

Women who struggle with other menopausal symptoms (such as hot flushes) may find HRT more beneficial. This restores hormones the ovaries are no longer producing. It can include a combination of oestrogen and progestogen, but oestrogen alone is usually recommended for women who have had a hysterectomy.

Although the side effects of this treatment often pass within a few weeks, there are many that could occur which patients should be aware of, including headaches, vaginal bleeding and breast tenderness. It can also increase the risk of breast cancer and blood clots. It’s important to discuss any concerns with your GP.

HRT is available in the form of tablets, gels, moisturisers and a skin patch.

Continuously taking medication or worrying about the side-effects of treatment can make patients turn to natural remedies in the hope of curing the issue themselves. But there is another option.

Vaginal rejuvenation, also known as Femilift, is a laser treatment that stimulates collagen growth within the vaginal wall. This helps rebuild and tighten the vaginal tissue, which as a result eases vaginal dryness.

Results can last up to two years when a course of three Femilift treatments is conducted at four to six weekly intervals.

The effects of this treatment can be life-changing for women who are dealing with dryness. The discomfort and pain of this menopausal symptom can cause stress and disrupt every-day activities.

Although this treatment isn’t affordable for everyone, as the price for a single treatment is around £1,250 and three procedures cost approximately £3,000, it’s certainly an investment. It potentially has no side effects, is pain-free, takes less than an hour and has no recovery time.

There are benefits to these medically-advised treatments but suitability varies for each patient. That’s why it’s important to discuss with a gynaecologist before making any hasty decisions.

Some home remedies may be able to soothe vaginal dryness, but many could also exacerbate the discomfort. Before experimenting with natural alternatives that aren’t proven to be effective, or even safe, it’s important to seek advice from a healthcare professional and determine the cause of the dryness. 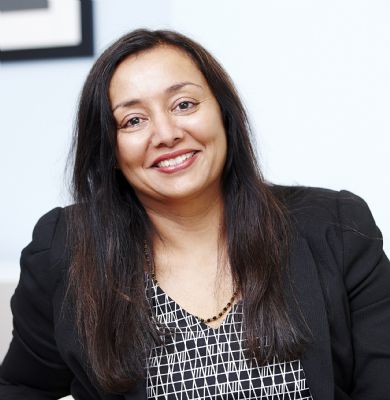 She has received specialist training in the use and administration of all products and treatments offered by the clinic. She is a full member of the British College of Aesthetic Medicine (BCAM) and the Royal College of General Practitioners (RCGP).

Dr Tailor is one of the UK’s leading non-surgical cosmetic specialists and is known for achieving natural looking results.